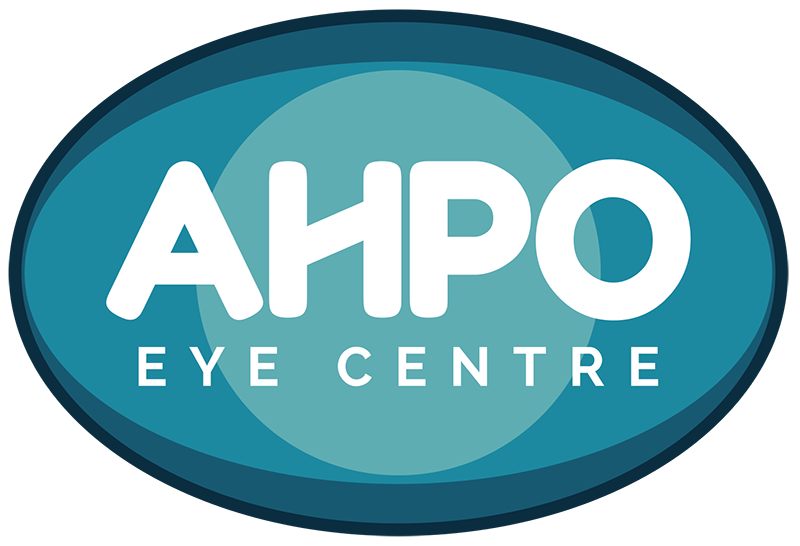 At the AHPO Eye Centre our consultants are expert in the management and treatment of glaucoma, including on-site Selective Laser Trabeculoplasty (SLT)

What is eye pressure?

To understand eye pressure we can think of our eyes as a small ball about 1 inch or 2.4 centimetres in diameter filled with fluid with and external coat (the sclera and cornea) with a consistency similar to fine leather.  The eye must focus the light entering the eye to create an image on the retina, and front of the eyeball there is a transparent circular section, called the cornea. The cornea is a powerful lens responsible for two thirds of the focussing power the eye. The lens inside the eye is responsible for the remaining one third.

The fluid inside the eye – called aqueous humour or just aqueous – is produced by the ciliary body that lies behind the iris. It circulates around the iris into the anterior (front) chamber of the eye and drains out of the eye through the trabecular meshwork between the cornea and the iris. The space between the cornea and iris forms and angle, hence it is called the anterior chamber angle. The pressure in the eye is determined by the rate at which aqueous is produced and the rate at which it leaves the eye.

Illustration showing the production and drainage of aqueous.

The eye has fluid pressure to maintain its shape. If the eye had no pressure the shape of the eye would alter every time we blinked and our vision would become blurred. The eye pressure (called intraocular pressure and shortened to IOP), is measured in mmHg – mmHg stands for millimetres of mercury. The normal range is around 10 to 21mmHg. We can get a sense of our eye pressure if we place the tip of our finger on the eyelid and gently press on the eye. Eye pressure can be measured with a number of instruments, called tonometers, that measure the amount of pressure needed to flatten or indent the cornea. This measurement is then used to calculate the pressure inside the eye.

When measuring the intraocular pressure the thickness of the cornea also needs to be taken into account as more pressure needs to be applied to flatten a thicker cornea and less to flatten a thinner cornea. As with every other body measurement, whether this be our height, blood pressure, heart rate etc., there is a normal range. An average cornea is about half a millimetre thick (0.5 mm). If the cornea is at the thicker end of normal, say 0.6mm, the true IOP measurement will be 4mmHg less than that measured with the tonometer; for a corneal thickness of 0.4mm, the true measurement will be 4mmHg more than the tonometer reading.

All the factors responsible for the loss of retinal nerve fibres in eyes with glaucoma are not fully understood, but in the majority of cases the pressure in the eye is raised, and we know that treatment that reduces the eye pressure can slow or stop further damage and loss of field of vision. In a minority of cases the eye pressure is within the normal range, and it is thought that poor blood circulation to the optic disc may make the eye vulnerable to damage from normal pressure. This condition is called normal pressure glaucoma or normal tension glaucoma.

What are the different types of glaucoma?

There are many different types of glaucoma. In general terms these can be classified as primary or secondary. In primary glaucoma there is no other eye condition that is causing the glaucoma. In secondary glaucoma another eye disease, trauma or drug is the cause of increased pressure leading to glaucoma.

Primary glaucoma can be open angle or closed angle. This refers to the space between the cornea and iris. 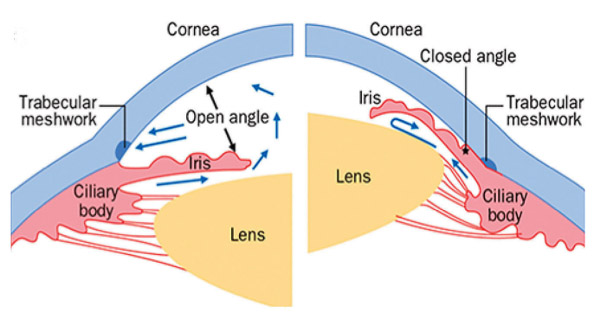 Primary open angle glaucoma is the commonest type of glaucoma and affects 1-2% of the population. It generally arises after 40 years of age and is more common and severe in black races than white. The risk of developing glaucoma also increases if a family member is affected. In open angle glaucoma the anterior chamber angle is wide and aqueous can reach the trabecular meshwork, but there is obstruction to the flow of aqueous out of the eye within the trabecular meshwork itself. Primary open angle glaucoma has few if any symptoms. There is usually no eye pain or disturbance of vision and is most often detected by the optometrist during a routine eye examination.

Primary angle closure glaucoma is a rarer condition but can be the commonest form of glaucoma in some populations in the far east. It occurs when the anterior chamber angle is narrow such that the iris touches the cornea and prevents the aqueous from reaching the trabecular meshwork. It can be acute or chronic. Acute angle closure glaucoma is more likely when the pupil is dilated, for example at night or in the cinema. This can lead to a sudden rise in pressure in the eye, that is associated with blurred vision, eye pain, headaches, and nausea and vomiting. In chronic angle closure glaucoma adhesions between the iris and cornea can cause partial closure of the anterior chamber glaucoma. Like primary open angle glaucoma there may be few symptoms.

Secondary glaucoma can occur following obstruction of blood circulation to the retina (retinal vein occlusion and diabetic retinopathy), with inflammation of the eye (uveitis), from the use of steroid eye drops and ointments and less commonly form steroid taken by mouth, and following severe trauma to the eye.

Who is at risk of getting glaucoma?

Glaucoma has been called “the silent thief of sight”. Often by the time someone notices that their vision is affected they have already lost a great deal of their vision, and unfortunately once lost the vision cannot be restored.

Anyone can develop glaucoma but some factors can put you at more risk.

How is glaucoma diagnosed and monitored?

There are a number of standard tests and procedures to diagnose and monitor glaucoma: 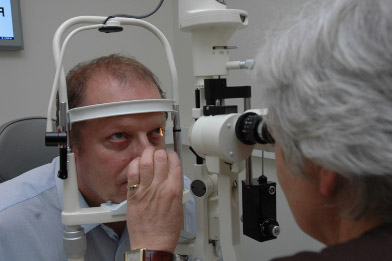 Examination of the anterior segment of the eye 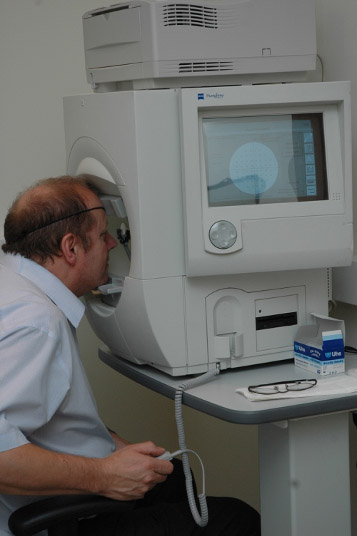 Assessment of the visual field 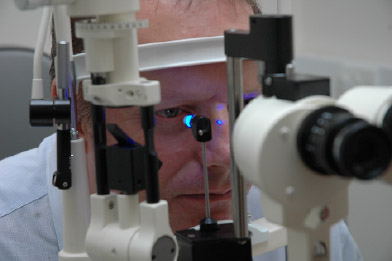 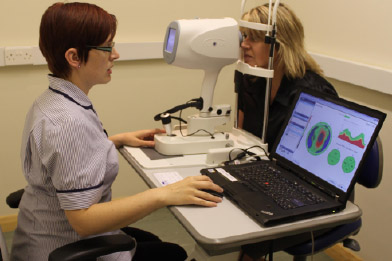 OCT of the optic disc and retina

If the tests show a high pressure, loss of the field of vision or damage to the optic nerve then you may have glaucoma or a condition that requires monitoring.

If you are diagnosed with glaucoma you must inform the DVLA and your insurers and they will arrange for a further visual field test to establish that you meet the legal visual requirements for driving.

What is the treatment for glaucoma?

Most patients with open angle glaucoma are treated with eye drops and just require regular follow up. If there are signs that are suspicious of glaucoma, for example ocular hypertension or visual field defects or OCT findings that are not definitely due to glaucoma, the patient may just need regular checks to monitor the condition.

Medical treatment. Most patients with open angle glaucoma will need to use eye drops ranging from once a day to three times a day. If a single drop does not control the pressure patients may be switched to a combination drop or further drops added. All drops have the potential for side effects and these vary according to the class of drop used. Some patients may be sensitive to the preservatives in the eye drops and may require preservative free drops.

Laser treatment for angle closure glaucoma. Patients who are found to have narrow angles and are at risk of developing angle closure glaucoma can be treated with a procedure called YAG laser iridotomy. In this procedure laser is used to make a small hole in the edge of iris near the trabecular meshwork so that aqueous can flow directly into the anterior chamber angle without needing to flow around the iris through the pupil. Acute angle closure is usually treated in hospital with a combination of medicines and eye drops to bring down the pressure, followed by a laser iridotomy.

Surgery. Some patients may progress despite drops and laser and an operation is needed to control the eye pressure. The procedure of choice is a trabeculectomy, where a small channel is created to allow aqueous to leave the eye and drain under the conjunctiva (the tissue that lines the sclera (the white of the eye). The new channel is made in the upper part of the eye and is covered by the eyelid.

Sometimes additional surgical procedures are required such as insertion of drainage tubes. This, involves inserting a small titanium tube called an iStent into the drainage channel of the eye.

BOOK NOW
We use cookies on our website to give you the most relevant experience by remembering your preferences and repeat visits. By clicking “Accept”, you consent to the use of ALL the cookies. However you may visit Cookie Settings to provide a controlled consent.
Cookie settingsACCEPT
Manage consent

This website uses cookies to improve your experience while you navigate through the website. Out of these cookies, the cookies that are categorized as necessary are stored on your browser as they are essential for the working of basic functionalities of the website. We also use third-party cookies that help us analyze and understand how you use this website. These cookies will be stored in your browser only with your consent. You also have the option to opt-out of these cookies. But opting out of some of these cookies may have an effect on your browsing experience.
Necessary Always Enabled
Necessary cookies are absolutely essential for the website to function properly. These cookies ensure basic functionalities and security features of the website, anonymously.
Functional
Functional cookies help to perform certain functionalities like sharing the content of the website on social media platforms, collect feedbacks, and other third-party features.
Performance
Performance cookies are used to understand and analyze the key performance indexes of the website which helps in delivering a better user experience for the visitors.
Analytics
Analytical cookies are used to understand how visitors interact with the website. These cookies help provide information on metrics the number of visitors, bounce rate, traffic source, etc.
Advertisement
Advertisement cookies are used to provide visitors with relevant ads and marketing campaigns. These cookies track visitors across websites and collect information to provide customized ads.
Others
Other uncategorized cookies are those that are being analyzed and have not been classified into a category as yet.
Save & Accept
Skip to content